Benign, tranquil, compassionate, caring and serene creator, with a faint smile that only the Gods will bear. Before we carefully have a revered look at our benign creator, let us check some essential facts related to Lord Buddha and Angkor.

Each face adorning the Temples of the Angkor Thom, the Bayon or elsewhere at Angkor, the serene & gentle expression on each of the faces is different. Possibly owing to having been created by different sculptors, or by design as such (decided by by the Priest-Architect or some such supreme authority) or just happened that way. But the tranquil expression just a look at which instils faith in us humans can very much come  from God Himself.  Glancing at all of us with compassion, caring and love that only God can give; the ultimate giver. There is absolutely no doubt there. Or so is our faith; my faith. 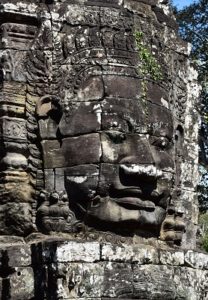 ‘Faith is an act of rational choice, that determines unto us that certain things were true and in the confident expectation that they will definitely prove to be true’. Dean Inge’s words are worth much more than what even he must have meant them to be worthy of. In most cases, especially in our personal or even professional relationships, faith counts much more than any other human virtue.

Religion is also a matter of faith. However, in as far religion is concerned, we are born into one; though not always so. Many of us might have a change of heart as we grow, find flaws in the particular religion we are born into or find other religion(s) having something strikingly superior to the one we have been practicing hitherto. And switch over to a different religion. But one thing is certain – faith. Faith has been leading us as to the path we take. Else, why would people travel in the airplanes or cars or even walk on our two legs. We are dri

ven by faith in each & every instance through the journey of life.

Avlokiteshwara, literally the Lord who supervises, the Lord who oversees; from above. All of us, or at least most of us, have a superior, be it at home or at the place of work. In due course we might become superiors. Then we begin to supervise those following us. Some of us are dedicated, honest and objective in our duty of supervision, while many may not be so. But, one very earnestly feels that most superiors are the former; we mean well of our wards & charge, guide them and help them lead a better life. At times better than us, as has been commented upon by Noble laureate Gurudev Rabindranath Tagore when he says ‘ A man must seek victory in all his endeavours but defeat at the hands of off-springs & pupils is better’.

Now imagine, if the supervisor be the God, the very creator? God will never harm his creations, even if the latter be the bigges 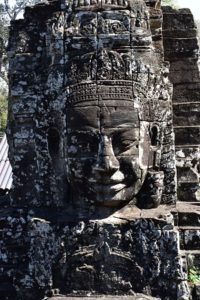 t of sinners. He shall help him come out of his sinning tendencies; never harm him; though we the lesser mortals might feel the situation differently.

Everything about Angkor is born out of this single all pervasive truth called faith, permeating into everything. If you have faith, as has been mentioned in a different post, the God is there, else….

Lord Buddha never proclaimed himself as God or any such being. As per known beliefs, upon passage of time when his followership became large, people began to institutionalise him as God. With further passage of time, He was pronounced as the ninth reincarnation of Lord Vishnu.  This apparently because he led a life of an ascetic, 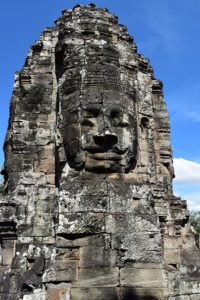 though descendent of a highly noble lineage He renounced everything. Emperor Ashok has his share of credit in spreading the teachings & life of Lord Buddha in the world. In absence of any written record except a few bark pieces entailing Lord Buddha’s life, we would consider it this way. Nobody can question that.

Time has taken its toll on the Temples at Angkor and more so on the faces of Lord Avlokiteshwara. There are well over 200 faces carved out on the top or mid-segment of temple structures. As told earlier each one is different.But each one remains a masterpiece  in itself. Each one fills you with internal peace as you behold those faces. Alas,

time and lack of maintenance has scarred those exquisite faces with irreparable wrinkles of age.

Wish one was born in the twelfth century to drench the soul in the nectar of those youthful faces of the Lord. Though weather affected, laden with accumulation of centuries of efflorescence, moss and algae, the Godly charm of none of them has diminished one bit. Though the stone joints (that might have initially been made seamless with minute infill of sandstone sand plaster) have opened up due to constant effects of heavy rains, dec 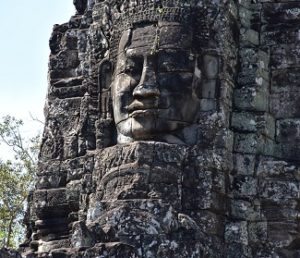 ades of extreme dry seasons and earthquakes and what not, but nothing has happened to  those expressions of a faint smile upon each face, to those eyes displaying expression of kindness we ascribe to just one entity – our Beloved Lord. Lord Avlokiteshwara supervising from up there that His creation is prospering and living in peace & harmony, that He always had deep desire of.