Though it’s rather early in the day, yet a few thousand quietly await leisurely  arrival of the early morning sun at Angkor, I was told of the scenario beforehand by my guide, the previous day. People jostle for th 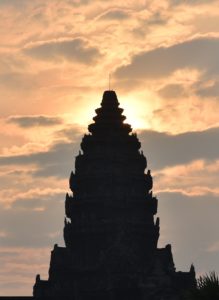 e right spot and many set up their cameras not wanting to miss the first rays. I had, though heard of this benign congregation of enthusiasts, but was still to experience what it appeared like in real life. Rains are still some distance away, yet clouds were slowly building up around Siem Reap, this February. A riot of the Reds & oranges is what they all seek.

The thoughts of matching my photographic skills with the ability of mother nature in enriching our lives were stirring me, from within . Arriving there I hired a Guide, Phiya, who smartly took me to the right spot as I have conveyed through a different page. Slowly making my way into the crowd, of whom I could not hear much; they were so quiet, I reached the right spot. With tiny patches of light emanating from  thousands of cell phones like fire flies, it was not difficult to surmise that they were numbered in a few thousand expecting  arrival of a long awaited guest. Now, I was one of them.

Before being ushered into the right spot by my Guide Phiya for my primary task that day, I had taken a picture of people walking ahead of me. They appeared exactly like a pride of lions on the prowl for a kill at night seen in those NatGeo documentaries. Some kind of deja vu setting into my mind. Have I been here before?! I asked myself. It happens… my mind told me. It happens often. Deja Vu.

The crowd became even quieter as the time for arrival of the first ray of sun became imminent. Cameras began to click as it just appeared to be the most opportune moment. Nobody wanting to miss even a fraction of that spectacle, then.

Not to be left behind, I also captu 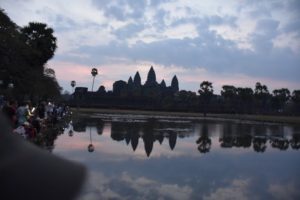 red the first ray first on my cell phone and then on my latest Nikon D750.

We all, at least those of us,  who have studied physics have known that VIBGYOR, the acronym for light’s spectrum has the colour violet at one end and the red at the other. Violet having the highest frequency and lowest amplitude while red just the opposite; the reason as to why we see burst of red colours in the mornings and evenings when the sun is farthest from us on the horizon. Here at Angkor, it is no different. Red was slowly appearing to be the dominant colour that February morning as well. It was little cloudy. Red began to increase and clicking of the selfies and cameras continued for a few minutes.

But just when we were expecting more of red and orange and bronze, lo & behold, it was turning blue and violet making logics of Physics stand on its head. I was

surprised and there was a certain murmur that erupted in the crowd. The crowd which was relatively quiet for a gathering of nearly five thousand people, was suddenly coming alive and then the activity picked up even more, perhaps because something unexpected was happening that day. Since when have the violets and the blues begun to have larger amplitudes than the hues of red? 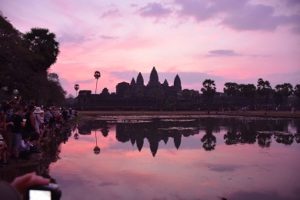 rising sun to my heart’s content. The colour though, never turned maddening red, vibrant orange or burnishing copper that day, but it was worthy of the effort and I tried to make the best of what was on display. Nevertheless, it were the blues & violets had caught my fancy. I was fortunate, I thought.

People began to leave but I stayed on as did scores of others who carried on with many pictures of the rising sun silhouetting the Angkor Wat’s magnificent Meru.. Though d 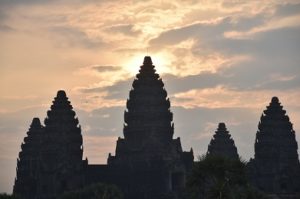 eprived of the riot of colours that one gets to see at Angkor on the internet or in those paintings that these Khmer boys create everyday, but to me, it was a valuable picture of those blues & violets, in place of red & orange. I was fine with a change in the setting.

Somewhere deep within I thought, the mother had defied physics. Prof Stephen Hawking need be conveyed of this strange phenomenon. He shall be a bit more amused than many of us present that day; perhaps with his deeper insights into matters providential . An IQ of well above 200, you see!

Physics, VIBGYOR, violets & the blues and Angkor; for your reading pleasure.